A Church has stood on this site for at least 900 years, built by dedicated Christians with modifications over the centuries. It is now a large, Grade 1, listed building – one of the finest in Essex. A Saxon church existed when the present church was started about the same time as the Priory/Abbey, whose fortunes it followed. This norman church, started in 1118 by Bishop Belmeis, was concerated in 1170. A pilaster, some moulding and a circular ‘window’ in the west wall are all that remain. The pilaster tells us that the church, even then, had aisles. Major rebuilding in the C13 included the present Chancel and transepts two bays wide and two bays deep, another indication of the wealth generated by the Abbey. The central columns of the two transepts can still be seen in the Vestry and the Church Room.

The Tower is essentially 14th century, with C18 and later changes and added buttresses. It houses seven bells, three inscribed “Miles Gray made me 1663”. The bells were restored and re hung in 2004/5. TV monitors show them ringing.

Another major rebuilding was being carried out in the prosperous 1530s. The old Nave and Aisles were demolished. The northern arcade was replaced by splendid Tudor brick piers and arches, originally plastered. The nave width was increased to the south by about 9 feet and an elegant hammer-beam Roof built. It is thought that the north Aisle was made to fit the finely carved C15/16 ceiling from the old nave. The north transept was cut back to the new line and rood stairs incorporated in the new wall. The south aisle was aligned with the south transept where C13/14 windows survive. There is a fine, but disfigured, font near the south door. The large piers at the east end of the nave are something of a mystery, but were probably the start of a new chancel arch. The position of the squints tells us that it had been intended to rebuild the chancel as well. But the dissolution of St Osyth Abbey in 1539 stopped work on the church and the chancel remains obviously ‘off-centre’. C16 graffiti in northern squint was found in 2004 when archaeologists from the television programme “Time Team” (Channel 4) were carrying out an investigative dig to try to find the original centre of the village 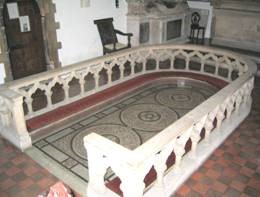 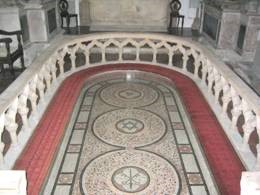 Of special importance in the chancel is a unique ‘horseshoe’ or ‘sheepfold’ Communion rail pictured above. This is Victorian replacement of a C17 wooden one of the same shape. The Victorian Reredos and painted ceiling both deserve notice.

Here are two extremely fine monuments with reclining effigies put in by the 3rd Baron Darcy of Chich to the 1st and 2nd Lord Darcys who died in 1558 and 1581 and their wives. Two other D’Arcy memorials are in the Church Room, one in poor condition. Other memorials in the Chancel to other owners of the Priory, the Rochfords and Nassaus, related to the Dutch House of Orange. On the wall of the north aisle there are various other memorials including one to Benjamin Golding who founded Charing Cross Hospital. William Slimon who founded Clacton Hospital is commemorated by the west window of the south aisle. Most of the other glass is Victorian, with picture glass in the Chancel and the Church Room. The two window memorials to St. Osyth and her martyrdom are particularly interesting. 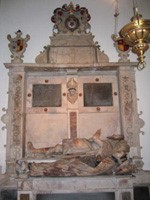 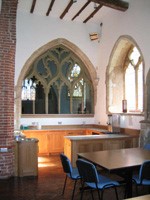 The C20 is represented by the pleasing and practical enclosure, in the 1980s, of the south transept to form the well used Church Room. It had previously been a chapel. The room includes storage and a sinks fitted in 2007 enabling coffee etc to be served after services and on numerous other occasions, (see The Lunch Bunch page). A toilet, washbasin and flower sink were also fitted into the south porch.

The Altar and Welcome area were created in 2004/5. Early in 2008 our old boiler was replaced with a more energy efficient model. Also in 2008, the Tower room was glazed in and the building was completely rewired. The old lighting was replaced with new modern energy efficient spot and flood lights throughout the Nave, North and South Aisles and the Chancel. Together, all improvements are giving us a good reduction on our energy bills while also reducing our carbon footprint.

In the spring of 2013 new choir stalls were installed and the old Victorian ones moved back to their original position in the Chancel. The new ones can be seen in situ in the above panoramic view and a close up below. 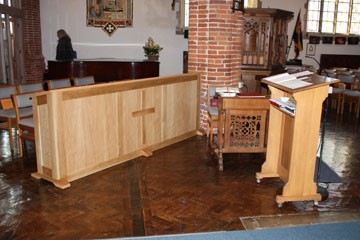